Nasal septum deviation is a physical disorder of the nose involving a displacement of the nasal septum. It’s estimated that up to 80 percent of the population has a deviated septum. While mild deviations are generally no cause for alarm, most people with a deviated septum do not experience any noticeable or disruptive symptoms. Many others are not so fortunate. Their nasal defect is an inconvenience that eventually becomes a profound and disruptive health concern.

See below for the five most common signs of a deviated septum.


What are the symptoms of a deviated septum?

Common signs of a deviated septum that’s severe enough to cause symptoms include blocked or obstructed nostrils, facial pain, noisy or trouble breathing, sinus infections, dryness of the nostrils, nasal congestion, sinus pressure buildup, snoring, sleep apnea, and nosebleeds. If you suspect you have a deviated septum and feel air escaping from your nose when you breathe, or your nostrils seem blocked, making breathing difficult, it’s high time for you to see an ENT doctor in Los Angeles for deviated septum surgery.

A misaligned symptom makes the nostrils uneven in size and shape. As a result, nasal congestion is often worse in one nostril than the other. Usually, the smaller nostril is the most heavily impacted by a deviated septum. Irregularities in airflow can lead to pressure buildup in the sinus spaces in the head and the smaller nostril, causing severe head and facial pain.

A deviated septum makes it challenging to breathe normally, especially in times of illness due to a cold or allergies. Treatment is necessary to correct defects in the septum to restore symmetry to the nostrils and alleviate pressure and mucus buildup.

Sinus infections are very common, especially in the Los Angeles area. Mild sinus symptoms and periodic infections are usually manageable with self-care, remedies, and prescription meds like decongestants and antibiotics. But for recurrent or acute sinus infections, ENT treatment is necessary to provide relief.

Sinus infections are usually caused by an overgrowth of bacteria in the sinuses and nose that typically shows up after a recent cold, allergy attack, exposure to smoke and poor air quality. Chronic sinusitis is also common when there are abnormal growths like polyps or tumors in the nose or sinuses or septal deviations.

If you experience sinus symptoms repeatedly, you might have a deviated septum and not realize it. The longer a septum is left off-center or crooked, the worse the symptoms can become. You’ll need to see an ENT doctor in Los Angeles for diagnosis and treatment to get relief.

Nasal misalignment due to septal deviations make it harder for air to pass through the nose. The breathing difficulties the condition causes are often more pronounced or noticeable when you are sick or suffering from allergies. Oftentimes, the most obvious sign of a deviated septum is breathing issues.

The nostrils must have a good degree of symmetry to allow proper and unrestricted air to flow through. A misaligned septum makes one nostril larger than the other restricting airflow. The smaller nostril can become partially or completely obstructed by the swollen and defective nasal tissues and bony cartilage of the septum.

It’s common for a deviated septum to obstruct both nostrils at the same time. Breathing difficulties caused by a deviated septum can cause pressure buildup, headaches, swollen or infected nasal tissues, nasal congestion, etc. Septum deviations don't just cause problems when you're suffering from a cold, the flu, or allergies.

The effects of a severely deviated septum can be debilitating and impact every aspect of your life, making it harder for you to inhale and exhale freely through your nose. You may even resort to breathing heavily and noisily through your mouth to compensate. Snoring, shortness of breath, and sleep apnea are also likely to occur when you sleep. Living with an untreated deviated septum can be very disruptive to your life.

Nosebleeds are common when the nasal airways are dry and irritated. A crooked and damaged septum restricts moist air from traveling the nose and airways. This dries out the moist membranes of the nose, making nasal irritation and nosebleeds more likely. If you experience frequent nosebleeds or any of the other symptoms listed in this article, contact your ENT doctor in Los Angeles to learn what’s going on with your nasal cavity that's triggering the discomfort. You may be surprised to learn that a septum deviation is involved.

As previously mentioned, septal deviations are very problematic when it's time to sleep. The condition causes the soft tissues in the nasal wall to block a portion or the entire opening of one or both nostrils. During sleep, these effects lead to forceful breathing that is also loud and noisy or snoring. 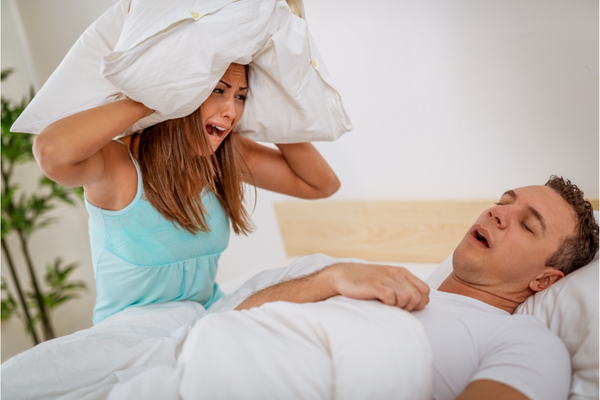 People with a severely deviated septum are prone to sleeping issues, daytime drowsiness, poor cognitive function, and impaired reaction times. This makes their condition even more dangerous because it affects their normal behavior. A deviated septum can also trigger snoring so loud and disruptive that it affects everyone in the household.

If you have difficulty breathing or suffer from frequent nosebleeds, or experience concerns that lead you to believe you have a deviated septum, you should see an ENT doctor in Los Angeles for an official diagnosis to learn suitable treatments for your needs.