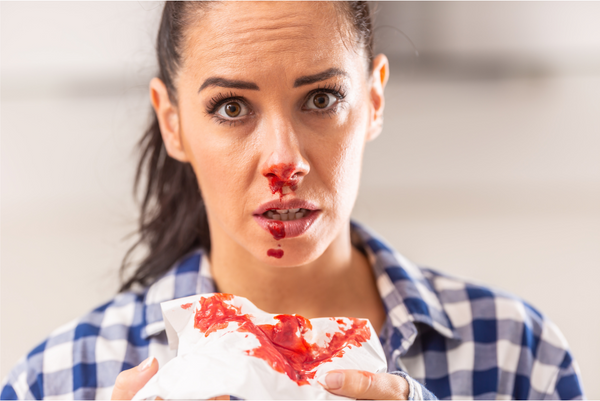 Nosebleeds: When Should You See an ENT?

Everyone has dealt with a bleeding nose at some point in their lives. The condition occurs when blood vessels burst in the nasal cavity, nasopharynx, or nostrils. Although nosebleeds can be alarming due to the amount of blood hemorrhaging from the nose, in most cases, they can be managed and are not necessarily a cause for alarm. Nosebleeds are a common occurrence for all ages. However, there are cases where nosebleeds require medical attention from an ENT specialist.

The medical term for nosebleeds is epistaxis. Nosebleeds often occur after trauma to the nose or nasofacial area, damaged blood vessels, certain medications (i.e. blood thinners), abnormal or diseased nasal tissues, inflammation, sinusitis, and nasal surgery. Because it's not always easy to deal with nosebleeds, especially when they become a frequent occurrence, it’s important to learn the warning signs that mean ENT treatment is necessary.

In most cases, epistaxis originates from damaged blood vessels in the nasal septum. These vessels are extremely delicate, and it doesn't take much for them to break. Nosebleeds are often diagnosed as anterior and posterior. When vessels in the front of the septum break and bleed, the condition is diagnosed as anterior. A hallmark sign of anterior nosebleeds is when blood drains from one nostril.

Most of the time, nosebleeds occur suddenly, and there is no direct or known cause. The following conditions are known to cause the blood vessels in the nose to burst and bleed.

How to Manage Nosebleeds

Nosebleeds can happen at any time. Unless the bleeding is severe, gushes from the nose, or is accompanied by pain, you can use the following pointers to stop the bleeding.

If the above steps fail to stop the bleeding, you should get medical attention right away by going to the ER.

Signs of When to See an ENT for Treatment

It can be quite distressing when nosebleeds occur, and although they can get messy, they are not always a cause for alarm. However, if you experience them a few times a week or have trouble managing the bleeding after 20 minutes, or notice any of the following symptoms, you might be a good candidate for ENT treatment.

Treatment depends on the cause and origin of the bleeding. After carefully evaluating the patient’s nose, symptoms and diagnostic tests, an ENT doctor may recommend the following treatment options.

Antibiotics may be prescribed in addition to nasal surgery, packing or cauterization to help prevent infection.

Nosebleeds are normal and, in many cases, preventable. Below are some useful strategies that help reduce the severity and frequency of epistaxis.

If you or a loved one experiences recurrent or frequent nosebleeds, it’s time to see a CV/ENT Surgical Group ENT specialist. Call

today to schedule an appointment.

Have Difficulty Breathing? The Answer Could Be Septoplasty.

It's a feeling some of us know all too well: congested, stuffy, obstructed breathing that leaves...
Read More

How Excessive Stress May Cause Nosebleeds For Patients

It is estimated that 77% of Americans experience physical symptoms related to stress. Stress can...
Read More

How to Choose the Best Ears, Throat and Neck Specialist

One of the most common medical referrals is for patients to visit an Ears, Nose, and Throat (ENT)...
Read More