What Are the Possible Long-Term Effects of Sleep Apnea? 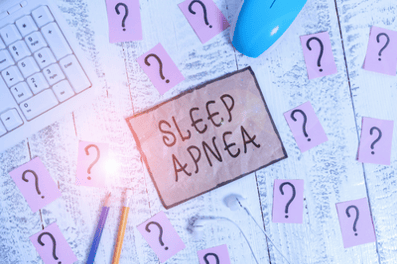 You may suffer from sleep apnea if you frequently snore or wake up feeling tired and unrested. Sleep apnea impacts up to 30 percent of adults between the ages of 30 and 70, according to the American Academy Sleep Academy. Though various sleep apnea treatments are available, ranging from snore strips, humidifiers, nasal rinses, mouth guards, and CPAP machines, they don't work for everyone. Many people suffering from sleep apnea eventually see an ENT or sleep specialist for relief.

Hallmark symptoms associated with sleep apnea include frequent interruptions in breathing during sleep, daytime sleepiness, decreased cognitive function, and headaches. The condition can wreak havoc on your health without timely diagnosis and sleep apnea treatment. Continue reading to learn the long-term effects of sleep apnea.

People at risk of sleeping difficulties due to momentary pauses in breathing during sleep often suffer from one of the following types of sleep apnea.

All types of sleep apnea cause intermittent pauses in breathing that occur multiple times an hour during each sleeping session. OSA can be managed if mild to moderate by ENT specialists. However, severe OSA and central or mixed sleep apnea require treatment by a dedicated sleep specialist or pulmonologist.

What Are the Long-Term Effects of Sleep Apnea Without Treatment? 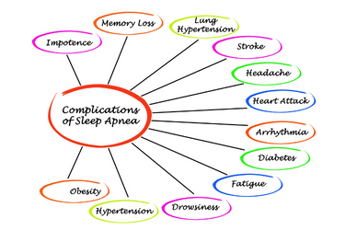 Sleep apnea and deprivation trigger many reactions in various body systems that manifest as physical and psychological symptoms.

The long-term psychological impact of sleep apnea includes a decline in memory recall, an increase in intense and persistent low moods like depression or anxiety, and trouble thinking and performing activities that require the use of both cognitive and motor skills.

The most notable effects of how sleep apnea impacts the body include:

Narrow or blocked airways that occur during sleep impair the function of the blood-brain barrier, decreasing its ability to prevent harmful substances, like germs, bacteria, and chemical substances from coming in contact with the brain.

Coronary disease has earned the moniker of “silent killer.” It is the most significant cause of heart attacks and premature death than any other known fatality. Strokes are an all too real risk for those with high blood pressure or obstructive sleep apnea. Intermittent breathing during sleep increases the overall lifetime stroke risk for women by over 50 percent; the risk is much higher for both middle-aged men and women.

Sleep apnea decreases airflow and blood flow, increases clotting activity in the vessels leading to the heart and lungs, and deprives the blood and vital organs of the oxygen and nutrients they need for proper function. Without early medical intervention, the risk of chest pain, heart attacks, and life-threatening coronary disease activity skyrockets.

Sleep apnea limits the body’s ability to recover from health and medical events, illnesses, infections, and even surgeries. Recovery delays and progression to central or complex sleep apnea are common.

Diabetes is often associated with hypertension and obesity but is also a common side effect of untreated sleep apnea. Sleeping difficulties and the anaerobic conditions caused by inadequate breathing during sleep prevent the body from storing and converting blood glucose into energy and burning excess fat. Instead, excess glucose remains in the blood, and body fat accumulates. The risk of developing other metabolic or hormonal imbalances is high.

Numerous chronic and autoimmune conditions have been linked to obstructive sleep apnea. Having a chronic or autoimmune disorder reduces overall life expectancy. When combined with sleep apnea, the risk of premature death is often unavoidable. The fatality risk is higher for middle-aged men than any other age group.

Sleep apnea is not always preventable, but obesity, recreational or sedative drugs and medications, age, and overall health are the most common risk factors in diagnosed sleep apnea patients.

Sleep apnea may not seem like a big concern, but if you're one of the many who put off getting a formal diagnosis or delaying sleep apnea treatment, you could end up suffering symptoms much longer than necessary. You could also compromise your immediate and long-term health.