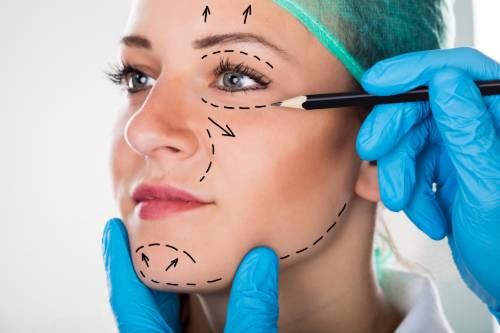 What Is a Minimally Invasive Facelift and How Long Is the Recovery Time?

Aging is a normal part of life that often results in changes to your physical appearance. However, getting older doesn't mean you're destined for a future with sagging skin, unwanted wrinkles, or a look of being tired all the time. If you're beginning to notice some subtle signs of aging in your face, there is a solution to help you regain a youthful appearance without looking like you've had anything done.

A minimally invasive facelift procedure, also known as a Mini-lift, can help rejuvenate your face to give you the natural-looking, younger appearance you deserve. In this article, we'll help you understand all the facts about the Minilift procedure, so you can make an informed decision. But first, we want to provide you with a brief history of facelifts and explain how far technology has come in such a short period to improve the entire facelift experience.

Also known as a rhytidectomy, a facelift is a type of cosmetic surgery that is often used to provide a more youthful appearance of the face. The first facelift was reportedly performed by Eugen Hollander in 1901 in Berlin. When an elderly woman asked him to lift her cheeks and the corners of her mouth, he reluctantly performed the procedure and successfully excised an elliptical piece of skin around the ears, thus providing her with a more youthful appearance.

During the First World War, a Dutch surgeon by the name of Johannes Esser discovered the skin graft inlay technique. During that same time period, British plastic surgeon Harold Delfs Gillies used the Esser-graft to teach others about facial plastic surgery, which earned him the title "Father of 20th Century Plastic Surgery". He, along with many of his colleagues, began to write papers on the subject, which led to an increase in aesthetic surgeries around the world.

So, as you can see, the history of facelifts is extensive and dates back to the very beginning of the 20th century. However, since the beginning, technology has continued to advance to make cosmetic surgery procedures easier, faster, and more effective than ever before.

Modern Facelifts Are Better Than Ever

At one time, it was often apparent that someone had a facelift because of the unnatural appearance of their face after the procedure. However, today's facelifts are much different. Rather than using tension in the skin to shape the face, your surgeon can simply reposition the soft tissues of the face, and remove or redistribute fat and tissue to give you a more youthful, natural appearance. That means once your procedure is over, you will look younger, but it will not be obvious that you've had any work done at all.

How Minimally Invasive Facelifts Are Different

If you've got a mild degree of jowling or sagging skin, you may be a good candidate for a mini facelift. This less invasive technique allows the surgeon to use shorter incisions, usually placed along the hairline above your ears or in the natural creases surrounding your ears. The procedure results in the lifting and tightening of the structural tissues around the cheeks, which is designed to:

Additional Benefits of a Mini-lift

Minimally invasive facelifts use technology to produce exceptional results with less invasive techniques, which usually results in less pain and faster recovery time. Using shorter incisions than a traditional facelift, Minilifts require that only small incisions are made under the cover of the hairline and around the ears. This enables the surgeon to tighten the skin and remove excess tissue to improve the appearance of the jowls and sagging skin in the neck. Additional benefits include:

Less pain: Since mini facelifts are minimally invasive, any pain or discomfort is drastically reduced in comparison to the pain you would experience with a traditional facelift procedure.

Lower cost: Mini facelifts are less complicated, require no general anesthesia, and are shorter to perform, which means the costs associated with these procedures are significantly reduced.

No general anesthesia: In a traditional facelift, general anesthesia is often required. However, in a Mini-lift, the surgeon can usually perform the entire procedure using a combination of twilight sedation and local anesthetic, thus reducing your risk for complications and side effects.

What to Expect During the Procedure

Unlike traditional facelifts, which are typically performed in a hospital, mini facelifts can be performed in a surgical suite inside the office. When you arrive for your procedure, you should expect to receive a combination of light oral sedation and local anesthetic to ensure a pain-free experience. During the procedure, your surgeon will perform your mini facelift according to your individual needs, which were discussed during your initial consultation.

After your mini facelift, you can look forward to experiencing a variety of benefits including:

One of the best things about having a mini facelift is that there is seldom any pain after the procedure. You may experience some discomfort on the following one or two days. However, most patients can minimize discomfort with over-the-counter pain relievers like acetaminophen (Tylenol). You will leave our office with a bandage and headwrap to be removed about 24-48 hours after the procedure. Then, your bandage will be replaced with a soft band for the duration of your recovery. Fortunately, all sutures will be removed within 10 days of the procedure.

If you're looking for a more youthful appearance, you should consider a Mini-lift. Take the first step toward reclaiming your youth by reaching out to a reputable cosmetic surgeon in your area. Be sure to choose a trusted surgeon with experience in a wide range of cosmetic procedures, including minimally invasive facelifts.

Tags: Cosmetic Procedures
Back to Blog